What is a Capsular Contracture?

The breast implant shell is constructed if an essentially non-reactive and inert silicone elastomer. Despite this, from the viewpoint of the human body, the breast implant is a foreign object and material. The healing response to such a foreign body results in the formation of a very thin layer of fibrous (scar) tissue around the entire implant. This thin layer that envelops the implant is referred to as the “capsule”. Such a capsule forms around every breast implant whether it is placed above or below the muscle.

In the ideal situation this capsule would remain thin, pliable, and distensible. Unfortunately however, there are times when it does not. This capsule, like all scar tissue, can contract. When it does so, the capsule shrinks in size compressing the implant inside of it. In doing so, the contracting capsule naturally tends to assume a shape that minimizes the surface area-to-volume ratio (a sphere).

This woman has subglandular saline implants with a Grade III capsular contracture. Notice the distortion and asymmetry of her breast shape; a somewhat elongated and cylindrical appearance has replaced the more natural round fullness. 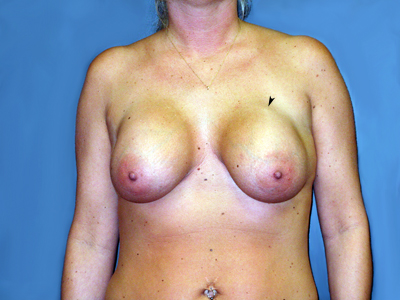 The visibility of the contracture is increased when she raises her arms to the side. The arrow points to a visible lump in the surface contour of her breast where the implant is folded inside the contracted capsule. When the implant shell is folded over on itself, a point forms along the edge of the implant; it is this point that is seen poking outward because the implants are above the muscle. 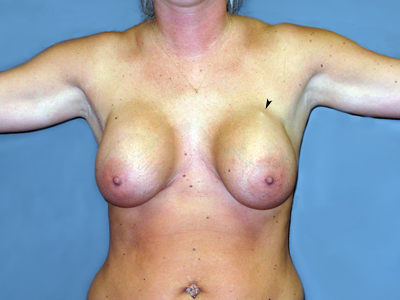 Unfortunately, there is no definitive medication or procedure to prevent a capsular contracture form forming.

And that is the real benefit of the photographs below. The photographs shown here really help illustrate a capsular contracture. The implants were removed from a woman who had grade III capsular contractures around her subglandular silicone gel breast implants. The first image shows the entire capsule was removed intact, with the breast implant still inside. In this particular situation, the capsule is particularly thin and transparent. Capsules can have a wide array of appearances; they can be thicker, more translucent, sometimes almost opaque, and can even be calcified in certain situations.

The transparency of this capsule allows you to see that the implant has been compressed, and as a result the shell has folded in on itself. The black arrows mark the line of folding.

A second view shows where the implant shell has been forced to ripple as a result of the contracture. The black arrows delineate where the shell is folded in on itself. The blue arrows mark locations of implant shell wrinkling.

In this third picture, when the capsule is opened and the contracture partially released, the deep groove formed by the inward folding of the implant shell is seen. The deepest part of the fold is marked by the dotted line. 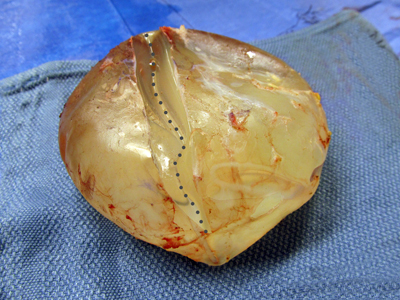 The black arrows in the photograph below show a crease in the breast implant shell as a result of it having been folded over inside the capsular contracture.

This site uses Akismet to reduce spam. Learn how your comment data is processed.