In a mild form, capsular contracture may go unrecognized, or may not appear particularly significant. These mild contractures do not usually require treatment. Mild capsular contractures that occur in both breasts may not be recognized, or viewed as problematic, by patients because symmetry between the breasts is relatively maintained. In more severe cases the breast can become quite firm, develop a distorted spherical shape, and may become painful. These characteristics are problematic, and patients often seek treatment.

Capsular contractures are graded I through IV using the Baker classification. In this classification system, Grade I refers to breasts that are soft to palpation, and easily compressible; the breast looks and feels normal. Grade II is assigned to breasts that are more firm than desired, but lack any visual changes or deformity. A Grade III capsular contracture produces a visual deformity of the breast, usually apparent as a spherical breast shape. A Grade IV contracture is characterized by extreme firmness, pronounced deformity, pain or tenderness, and sometimes coolness to the touch. 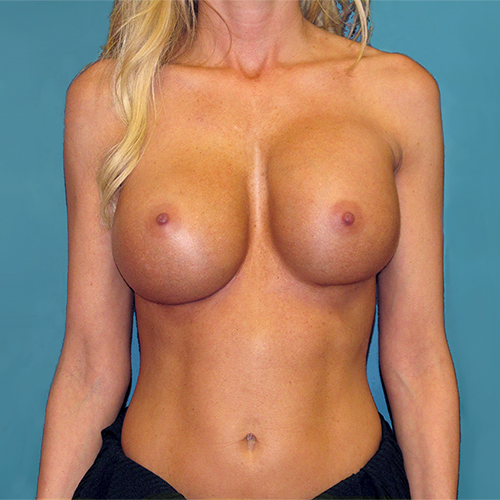 {insert pictures of Grade I – IV}

The cause of capsular contraction is unknown, but it is likely related to some sort of scarring process. Abnormal or excessive scarring may manifest in some individuals, for reasons that are unknown. Or, the capsule might form following some inflammatory process that induces additional scarring around the implant. Capsular contracture has occurred following hematoma, seroma, and sub-clinical infection.

How Do You Reduce The Risk Of Capsular Contracture?

The best way to reduce the occurrence of capsular contracture is to reduce prolonged inflammation and the possibility for scarring. This is best done during the surgical procedure. Utilizing an operative approach that minimizes the risk for infection, minimizes pocket manipulation and reduces tissue trauma, minimizes bleeding, and involves minimal implant handling should reduce the risk for capsular contracture. Pre-operative i.v. antibiotics, utilizing a submuscular pocket, rinsing the pocket with antibiotic solution, and minimizing contact between the breast implant and the skin will reduce the risk for infection. Precise surgical technique will reduce the risk of bleeding and minimize tissue trauma. These specific approaches should minimize infection, bleeding, and seroma formation; thereby reducing post-operative inflammation and the subsequent risk for scarring and capsular contracture.

Textured implant surfaces have been shown in some studies to reduce the incidence of capsular contracture, compared with smooth surface implants, when placed in the subglandular position.

NEXT TOPIC: Unexpected Outcomes and Complications

What is the Gel-to-Shell Fill Volume Ratio?

How Firm is a Saline Breast Implant?

During the consultation today, a patient asked me, "Aren't saline implants harder?" Well, it actually depends. Let me start by saying that if you have ever held a saline implant and a silicone gel implant side-by-side, you know that they feel completely different, and...

Why is a board certified plastic surgeon important for my breast augmentation?

I recently saw a woman in consultation for a failed saline breast implant. She had her breast augmentation performed seven years earlier by a surgeon who advertises like a plastic surgeon, but is not board certified in plastic surgery.  And as far as I am aware, has...

Contact us for more information, with your questions, or to schedule a consultation.